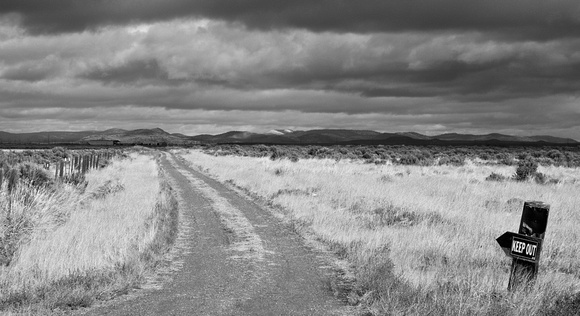 On the other side of this curiously unwelcoming sign once sat the community of Arrow. Founded in 1910 just east of the Connley Hills, Arrow was the southernmost town in the Fort Rock Basin, and one of the first to be abandoned as homesteaders began to leave after 1917. It had a large general store in a separate building, one of six in the region (smaller stores were run out of ranch houses or post offices). The stores were supplied irregularly by long freight wagons pulled by strings of six to eight mules or horses. Often, eager homesteaders would wait at the store for the freight wagons to arrive and buy all the goods off the back of the wagon before they could be unloaded into the store.