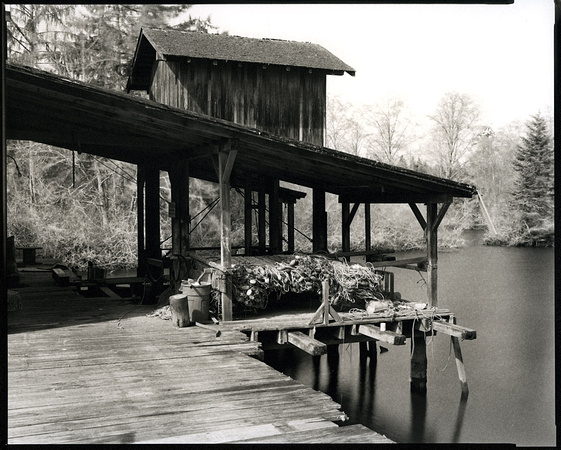 Net Barn No. 2, Along the Lower Columbia, Oregon

Two types of nets were used to harvest Columbia River salmon at the turn of the century–the gillnet was deployed by two independent fishermen in a small boat, usually working on contract with a local cannery, while larger seine nets were used by teams of men and horses hired directly by the canneries. Haul-seining involved setting out long nets along sandy shores that teams of horses hauled in while walking up to belly deep in the ebb tide. The teams could pull in 100 tons of fish a day, so efficient that the practice was eventually outlawed as the threat of over-fishing became apparent. As early as 1883 The Astoria Daily Budget was sounding the alarm:
“The fish have been attacked with a savage greed that has already almost ruined the business. In addition to gillnets, seines and wheels have been used, and a forest of fish trap poles in all the bays and on all the shoals has made it well nigh impossible for even a few fish to run the gauntlet and proceed to their spawning grounds.”
© Rich Bergeman Photography
Powered by ZENFOLIO User Agreement
Cancel
Continue